THE HERBS, THEIR GROUPING AND ACTIONS

Chinese herbal medicine dates back almost 5,000 years and its origins are intwined with mythical characters such as Shen Nong (the Divine Farmer) and Huang Di (the Yellow Emperor). Chinese medicine understands the human body as an integral component of nature and in its treatment, looks to restore balance and harmony to this relationship. With the use of herbs specifically, our aim is to keep the body ‘on time’ by regulating the exchange of energy between the human and nature, by speeding or slowing down the recharging and discharging of yang or ‘heavenly principle’ from the body. This essay will seek to explore the herbs as characters in this story; to name them, group them by their characteristics and describe the nature and actions on the proper functioning of the body. 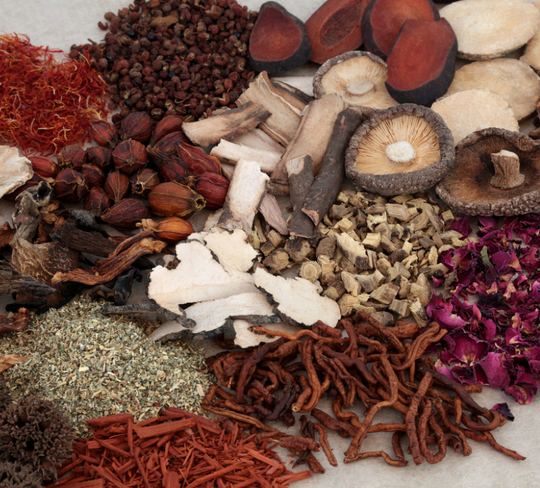 Properties in relation to use more widely and symptomatically in Chinese medicine (and Traditional Chinese Medicine) are mentioned as a point of interest, particularly where there is crossover or similarity, though to avoid confusion the primary focus is on their effect on unification and the proper speed of the circle of life. Without further ado, I introduce to you the cast…

‘THE CLOSERS’ – HERBS FOR YANG MING

As a collection of herbs this group generally aims to speed up Yang Ming (being yang has a tendency to slow) and aid the drawing inwards of nutrition, heat and the heavenly principle.

Neutral in quality, it aids movement inward on the circle, down the right-hand side. It is thought to affect the spleen, lungs and stomach and can be used to moisten the lungs and resolve phlegm. It is widely used and forms a common component of many well-known formula.

Sour and bitter taste, cool energy. Often used for tonifying the blood and thus also works within Jue Yin (slowing down), it acts to speed up Yang Ming and thus can be used for headaches, dizziness and irritability. Not good for cold conditions.

USED FOR ACUTE CASES/SHORT TIME ONLY…

Huang Qin – known as one of the ‘three yellows’

Also has bitter taste and cold in nature. Acts more on the middle jiao as opposed to the upper jiao. Used for heat and damp, toxicity, itchy skin lesions when Yang Ming is critically slow.

‘THE SWEET ONES’ – HERBS FOR TAI YIN (WARM and NEUTRAL)

As a collection of herbs this group assist the capture and descent of warmth deeper into the body, nourishing and supporting life.

Sweet taste and warm to neural in nature. Helps to tonify the qi, strengthens the spleen, limbs, blood, poor appetite, loose stool. Used a lot! ‘everybody loves Dang Shen’ (not to be used with a cold or virus)

Also sweet and neutral, this herb is mildly wet and so can be used together with Jue Yin herbs for dryness. Strengthens the stomach and spleen and can treat wheezing, dry cough and frequent urination. This can be substituted with plain rice (in a tea bag to avoid congee!)

A non-hot unification herb, it has warm energy, is pungent in taste and is drying in nature (thus used to counteract damp). It is said to affect the spleen, stomach and kidneys, or Tai Yin aspect of the circle, used for indigestion, distention and diarrhoea. Caution of use when Yang Ming is slow.

Spicy, sweet and warm, this is another non-hot unification herb and is used in combination with other fiery herbs (e.g. cinnamons) to submerge the fire. It is associated with the kidney meridian and can be used for general body pains.

These herbs both work to hold energy in the unification area and thus most commonly used in elderly patients. Is said to strengthen the liver/kidney and thus the sinews and bones. Often used to treat weak back and knees,  in TCM it is sometimes used to prevent miscarriage.

Commonly used for many problems affecting digestion, Bai Zhu is moderate and safe with a bitter/sweet taste and mildly warming energy. It is an outlier in that it actually slows down Tai Yin and so good for use with diarrhoea and loose stool. It affects the stomach and spleen and is commonly used to clear damp, phlegm and water retention due to Tai Yin speeding up (i.e., weak spleen).

Works on Tai Yin towards unification. Da Zao have a sweet taste and work on digestion, Xing Ren moisten the lungs and stop coughing and wheezing. They are combined for balance in use in separation formulas.

Sweet and spicy, mild in action. This is a ‘hot’ herb that promotes downward action on the right-hand side of the circle towards unification

Sweet, spicy and hot! This is the stronger sibling of Lan Gui and therefore has a more powerful warming effect on the descent towards unification. Used with caution where signs of heat/thirst are already present.

Spicy, hot unification herb. Peel and slice to use with cinnamons and liquorice for unification. Said to affect the stomach, spleen and lungs, it can be used for nausea and to

induce sweat in the presence of colds and nasal discharge.

(a note on ginger in general…)

Gan Jiang is dry ginger and acts to slow down Yang Ming and Tai Yin (‘warms the middle’), so can be used to balance the action of more fiery herbs.

Pao Jiang is roasted ginger and is also said to warm the middle and disperse cold but its effect on the circle is to slow down separation so applicable in acute cases of sweating.

This is the queen of the unification process. It is sweet in taste and warming in nature but is key to submerging and unifying fire within the body. Its actions include revitalising the heart, treating palpitations, feelings of cold, poor sleep, tiredness and fatigue. It is said to strengthens the spleen, lungs and stomach and soothes digestion. An essential ingredient in all unification formulas.

‘THE PUSHERS AND THE PULLERS’ – HERBS FOR JUE YIN

Jue Yin corresponds to the deeper parts of the body, to the blood and the joints. It is the first movement out of unification towards separation and thus corresponds to waking at a proper hour feeling rested and ready. It has both a tendency to slow down and to speed up.

‘THE PUSHERS’ – speeding up Jue Yin when it is too slow

It is sweet and pungent in taste and has warming energy. It can be used when there is painful, dark and clotted menses, PMS with breast tenderness and headaches, fatigue in the morning and difficulty waking up. It can also be appropriate with water retention/oedema and with deep pains of the chest, abdomen and joints. It is said to ‘nourish and invigorate the blood’.

Mild in action and similar to Dang Gui in properties and action. It is said to ‘warm the liver, expel cold and treat pain’.

Only used when absolutely necessary and for short periods as they can take away from unification and weaken the body. They are pungent and bitter in taste and often used only during the first few days of a very painful period. They are said to ‘move and invigorate qi and blood’

‘THE PULLERS’ – slowing down Jue Yin when it is too fast

As Jue Yin fast often presents with symptoms of dryness; skin, eyes, vagina, these herbs all have mild to strong moistening properties. They are listed from the least to the most ‘wet’. Other symptoms of Jue Yin fast may include poor sleep/waking too early, hot flushes, very heavy or scanty menstruation and emotional volatility.

Similar in action to Hei Zhi Ma, this can also be used with unification formula and in TCM terms is used to ‘clear empty heat’, working on the kidney and liver.

Sweet taste, neutral in energy but stronger in effect than Nu Zhen Zi or Hei Zhi Ma. It is thought to be of particular use when nourishing the blood for poor vision and dizziness.

Sour, bitter, cool. As mentioned in ‘The Closers’, as well as slowing down Jue Yin, Bai Shao also acts to speed up Yang Ming, particularly when combined with Gan Cao. It is also frequently combined with Dang Gui (‘The Pushers’) to complement its sour cooling properties.

Rarely used but helpful in severe cases of Jue Yin fast – raging night sweats, hot flushes, extreme dryness together with amenorrhea, palpitations and dizziness. Can cause diarrhoea and loose stool thus to be used with caution.

‘THE SEPARATORS’ – SEPARATION HERBS FOR SHAO YANG AND TAI YANG

These herbs are used when separation is blocked or inhibited, e.g., absence of sweat through wind/cold invasion, and/or inhibited urination. They act to ‘push out’ to the exterior of the body and beyond and restore timeliness of the circle.

Pungent, sweet and warming in nature, this herb has a mild speeding up effect on Jue Yin, Shao Yang and Tai Yang, but does not take from unification. It can therefore be safe to use in weaker or older patients.

Chai Hui has a bitter taste and cooling action it can be used to treat acute Shao Yang disorders (e.g., alternating fever and chills and acute physical aches and pains). It is also used for ‘regulating the qi’ in some cases of depression, mood swings and tightness of the chest. It is generally used for a short time only.

Sweet, bland, neutral, this herb is used to regulate difficult urination, particularly due to dampness, fluid retention and abdominal distension.

Strong action on separation and thus used for a short time only in acute conditions. It induces sweat and is used for cold and flu type symptoms of Tai Yang; aversion to cold, fever, stiff neck and head, body aches etc.

This herb helps to return the fire and is used to calm the spirit and quieten the heart. It also promotes urination and can be used when there is blood in the urine.

As mention in ‘The Sweet Ones’ these herbs are often added to balance separation formula by working on Tai Yin to fortify unification.

And thus, you have the main cast! There are hundreds of herbs that play a supporting role but these main players can be used effectively to treat most conditions. I look forward to working with them individually and collectively in combination as a director would get to know and use his or her cast of players. Sometimes you need to stir the action with a protagonist, sometimes you need to calm the audience with a reassuring mother figure. The herbs and their actions play out within the theatre of our lives.

Tom Watson is a highly skilled practitioner with almost a decade of clinical experience across several busy London locations. He also lectures as a course leader at the City College of Acupuncture and the International College of Oriental Medicine. He has foundational training in Classical, TCM and Stems and Branches styles of acupuncture and continues to develop his skills across a breadth of specialities including fertility, paediatrics and first aid.

Tom was born and raised in London and has cultivated a lifelong interest in Taoist movement and healing arts. He has studied and practiced various martial arts, including Tai Chi and Ba Gua Zhuang for over 20 years. Tom also teaches Qi Gong, a form of meditative movement for health, running popular classes and workshops in North London (and Zoom!), as well as being a practitioner of holistic massage.

Tom is registered with the British Acupuncture Council and a certified Chinese Herbal Medicine practitioner, by Academy of Holistic Healing Arts. 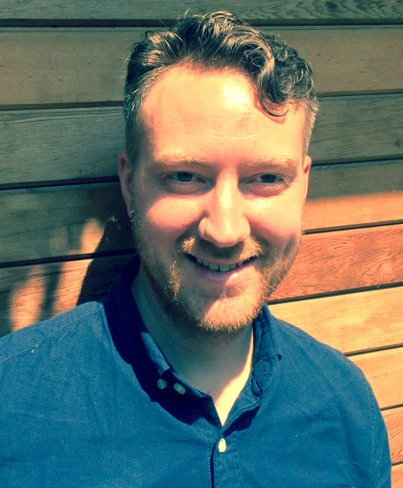